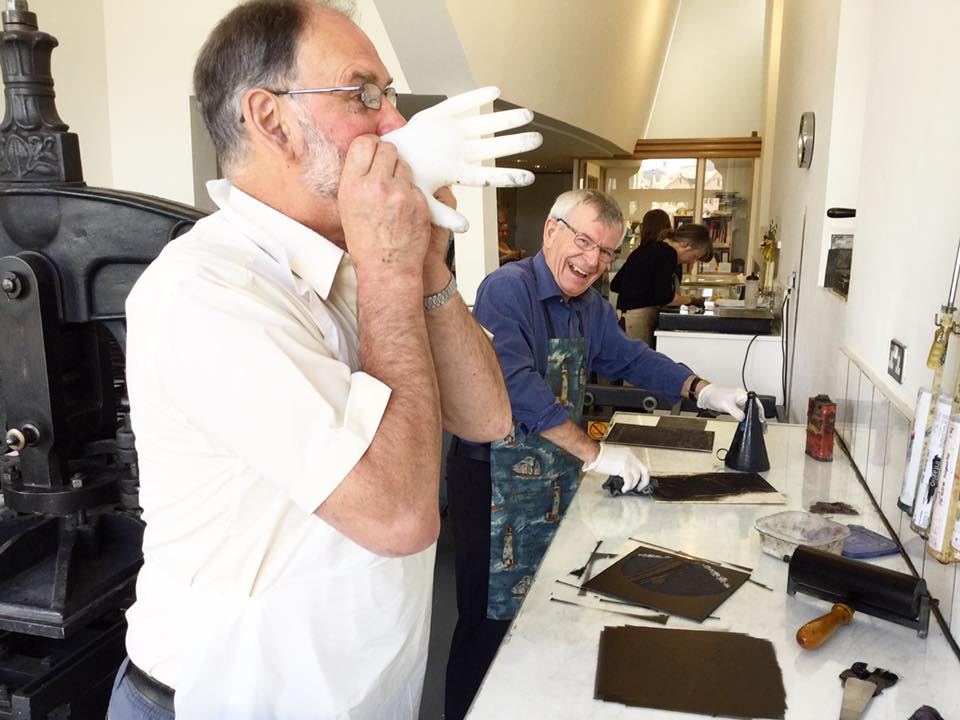 This project was initiated by Highland Print Studio in 2011-12 in response to research by Age UK and other organisations, which demonstrated that older men do not appear to engage with social activity to the same extent as women, and in some circumstances could be at risk of loneliness and isolation.

The concept was simple. Men. Aged 50+. No visual arts experience. A regular Wednesday morning workshop at Highland Print Studio to learn printmaking over a few months. Coffee and chocolate biscuits on tap.

The result: a project that has been so successful it has continued for five years, attracting men from all walks of life to engage in both traditional and modern printmaking, such as etching, linocut and screenprinting, as well as creating a cacophony of social banter. Artist talks and other social evenings have also helped make Wise Guys a sociable experience.

“I went along to the Highland Print Studio to become a ‘Wise Guy’ the week after I retired.  Like the rest of the guys who came along that day I had no idea what actually went on in the building. Looking back now I can’t quite believe how much I have learned and achieved. We were taken through several printing processes and then let loose to try to create our own ‘masterpieces’! John and Alison are there every step of the way. Their patience and encouragement is second to none. I really think without them I would have given up! The building has an amazing atmosphere and that’s down to those who work there.  I’m so glad to have done this and discovered a brand new interest with like-minded people. I have every intention of joining the Studio as a member as I’d miss it too much!” Terry Henderson, Wise Guy

“We received this funding specifically to work with older men because research shows that older men have difficulty finding activities that are appealing to them. We’re hoping that printmaking and its emphasis on working with materials, tools and equipment, might be the thing that gets their creative juices flowing!”

This turned out to be bang on. Some of the original Wise Guys are still developing their printmaking skills in 2020, and have joined the Studio as independent printmakers. There have been ‘spin-offs’: one Wise Guy went on to develop a Men’s Shed in his local area; another created magnetic registration blocks for etching and taught himself to make picture frames, including for some of the Studio’s exhibitions; another even built himself an etching press.

“I feel privileged to have been given the opportunity to be a member of the Wise Guys. I have learnt many printing and digital techniques and have been encouraged to experiment. Interest has always been shown in my work and guidance from John and Alison has always been on hand, forthcoming and valuable.” Trev Johnson, Wise Guy

Wise Guys have given talks on the project at Age Scotland and Luminate receptions. They have been interviewed on BBC Radio Scotland’s Culture Café, and have met Culture Secretary, Fiona Hyslop.

In June 2017, Wise Guys entertained Scottish actor Elaine C. Smith at the Studio. They also taught her how to spin a roller, ink a lino block and pull a print during filming for the Inverness episode of her Burdz Eye View STV series, which was broadcasted in autumn 2017.

Prints by the most recent group of Wise Guys (2016-17) were exhibited in the Studio in August 2017, they were all chuffed to see their work up on the walls for sale. It then made it way into the Scottish Parliament in 2018. All framed by a Wise Guy, of course, with some help from his apprentices …