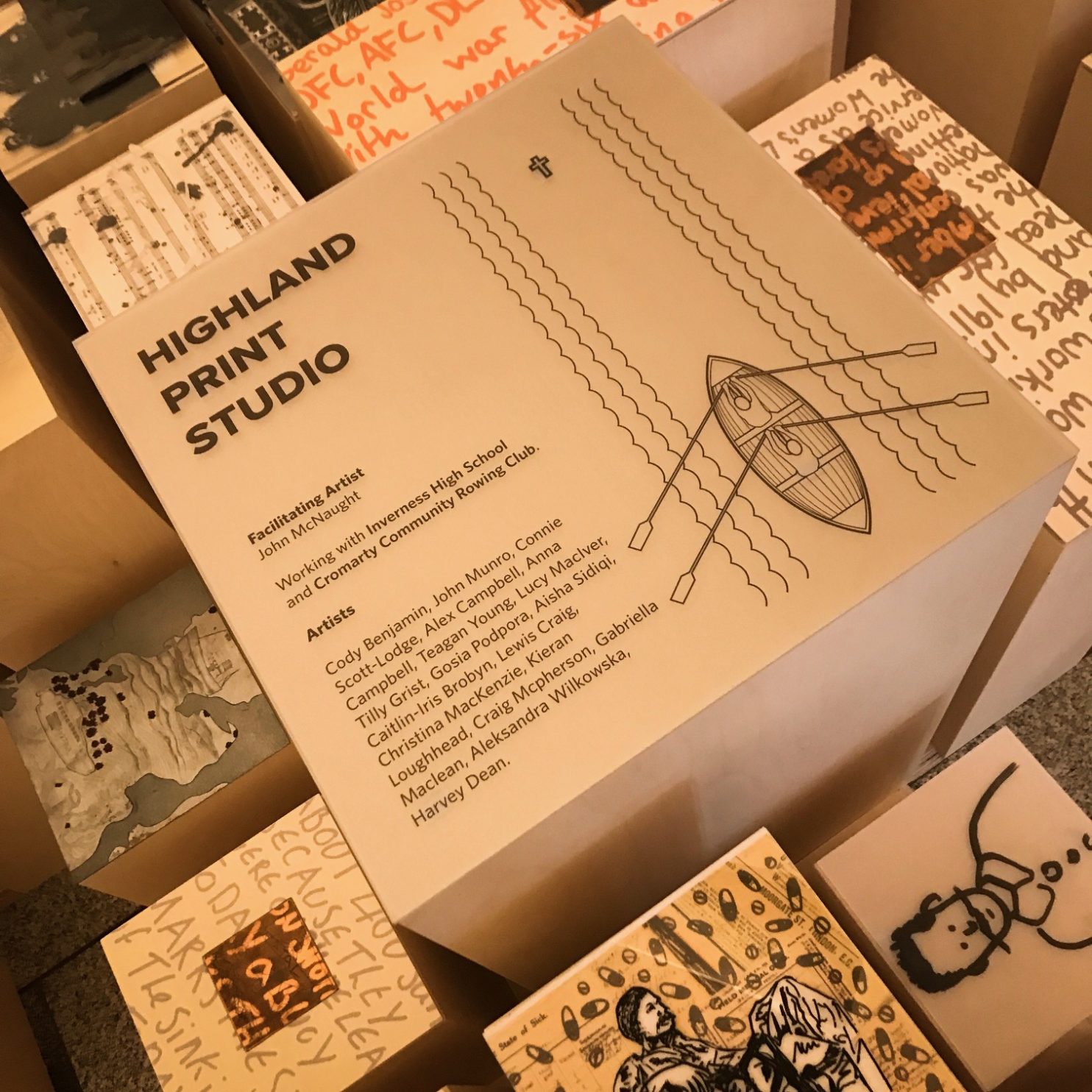 Highland Print Studio, along with four other Scottish print studio’s worked in collaboration with the Glasgow-based design collective, Lateral North on this WW100 project funded by the Scottish Commemorations Panel. The project involved each studio working with 20 young people, who created their own original print inspired by a significant story or memory from World War 1. Lateral North devised a sculptural installation consisting of a series of plinths set out in the shape of the map of Scotland. The printing blocks used to produce the artwork would top each plinth and have one of the stories embedded into them using augmented reality. 100 Students produced 100 prints to mark the 100 years since the war ended.

Our Studio Manager, John McNaught, worked with 10 pupils from Inverness High School and also 10 from Cromarty Youth Café, setting up a portable printmaking studio in Cromarty Town Hall. Over several weekly sessions, the students learned how to create their own copper plate etchings, illustrating their particular story. Once the plates were etched and a limited edition of five prints, their plates were then inked up and left to dry. They were then inlayed into a piece of woodcut plywood and their stories screenprinted over the entire surface of wood and copper.

Once all 100 prints were editioned, each studio then had 1 from the edition made into a book. Five books representing the five studios and five areas of Scotland. The books were hand bound by John and Jan here at Highland Print Studio.

The exhibition, including sculptural installation, hand-bound books and augmented reality opened at the Scottish Parliament on 3rd September 2019, launched by First Minister, Nicola Sturgeon. All the work exhibited together created a map of Scotland. The title of the exhibition was named ‘What do We learn from all th1s.’

You can check out the installation at the Parliament here on the Lateral North youtube channel. There were also plinths representing each of the print studios. These plinths had videos documenting their work with the young people embedded in them. Highland Print Studio’s video also includes footage of some of the young people, who are members of Cromarty Community Rowing Club, rowing out towards the buoy that marks the sinking of the HMS Natal, now an official WW1 war grave. Lateral North created a video to show the young peoples process through-out the project, including Cromarty Youth Club rowing out to the Natal. The video can be viewed here.