The idea behind ImpPotent was to create a one-off special edition of the Hillman Imp, with artists working on accessories and features for the car. In total there were sixteen commissioned pieces including an Ashtray Temple by David Mach and my own Instruction Manual. David’s ashtray reflected his work of the time in miniature by constructing a temple from Corgi car tyres. “There’s the unrivalled pleasure of driving in a car which has been cleverly designed and built with serious smoking in mind”, waxed the brochure. The instruction manual was a concertina fold artist book with hand-tinted linocuts, the brochure being equally enthusiastic: “No more fumbling in the back seat with this limited edition, fully illustrated guide to the POTENT – it cascades from the glove box – ergonomically designed for on the road reading”.

In my opinion, one of the most eye catching features was the Knitted Imp by Nancy Jacobs. As the catalogue put it: “ Women of vision have ideas. Ideas which very few others can comprehend.” Nancy would have argued this- she never saw herself as an artist. 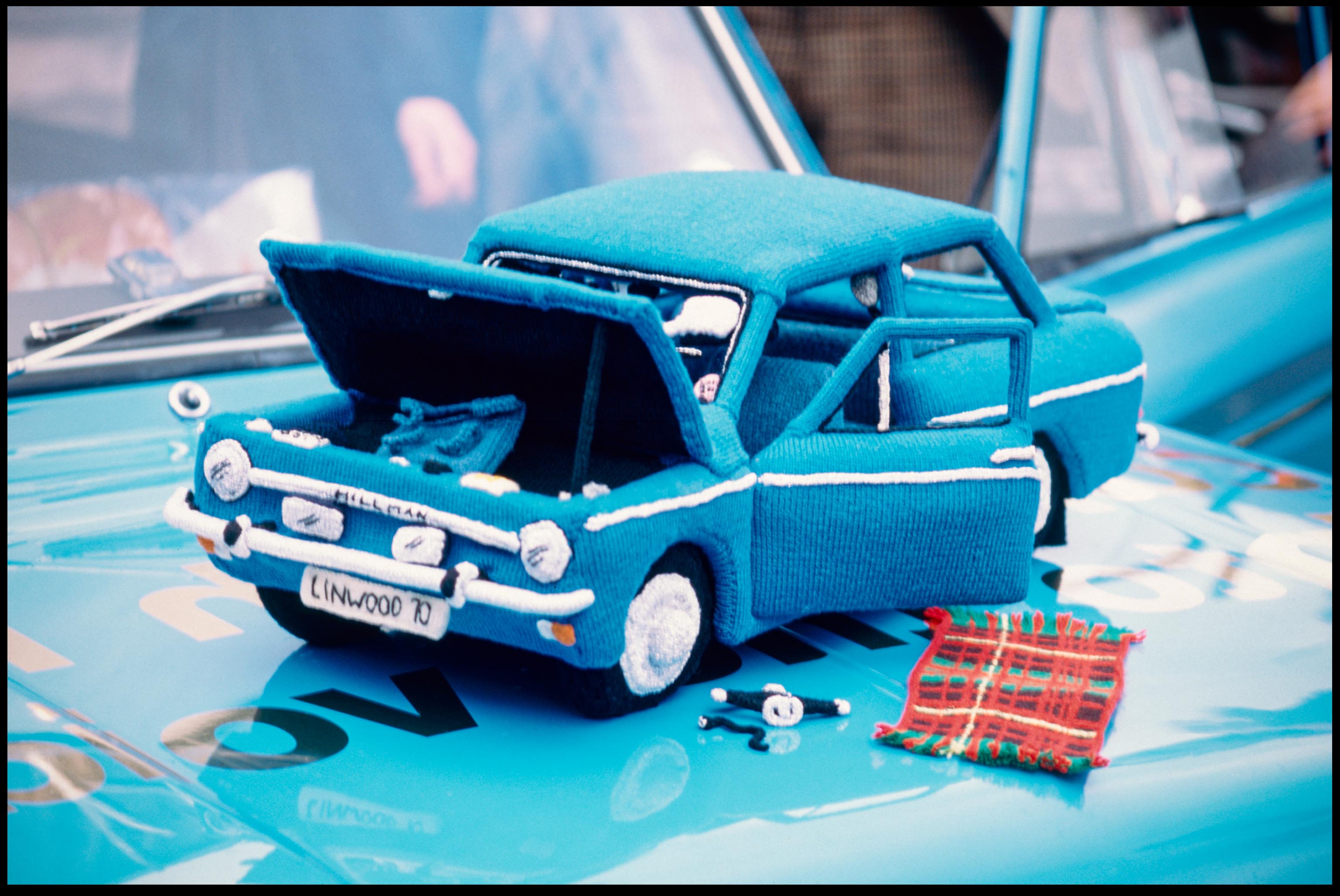 I first came across Nancy Jacobs in the early 1990’s when I was Artist in Residence at the old Ross & Cromarty District Council. I was doing a project at Ardross Primary School, working with Shona Gray, one of the most amazing teachers I ever came across. Nancy would help out at the school, her daughter was a visiting teacher there, and one day when we coincided, she was showing this remarkable piece of knitting to the children. It was part of an orchestra she was knitting for her grandaughter, who was a budding musician. I think from memory it was a small person playing a chelo, carried out in amazing detail. Not content with this single cellist, she was intending to knit the entire orchestra. Talking to her, it became clear that jumpers or hats were not for her, Nancy liked to knit things that were completely unsuitable for knitting. Such as a wallet, filled with knitted bank notes and credit cards. Or a Boeing aircraft, when her grandaughter was going to the US.

After a bit of persuasion, Nancy agreed to help me on another project, creating a velcro suit with the Isobel Rhind Centre for adults with learning disabilities. This was an all in one outfit which allowed the wearer to have Invergordon on their body, with fabric printed replica buildings stuck to the suit. Nancy knitted street furniture. She went on to knit a sculpture of St Duthus and a red kite for the museum in Tain. The kite was anatomically accurate with the correct amount of feathers, all individually knitted and perfectly overlapping. Highland Printmakers Workshop invited her to take part in a 1996 exhibition looking at the 250th anniversary of the Battle of Culloden. For this, she knitted a fallen Jacobite on the moor. Her sense of unusual detail and humour was always present, in this case when the kilt was lifted, perfectly knitted wedding tackle was revealed, complete with ginger pubes… as seen here reported by Margaret Chrystall in the Highland News. 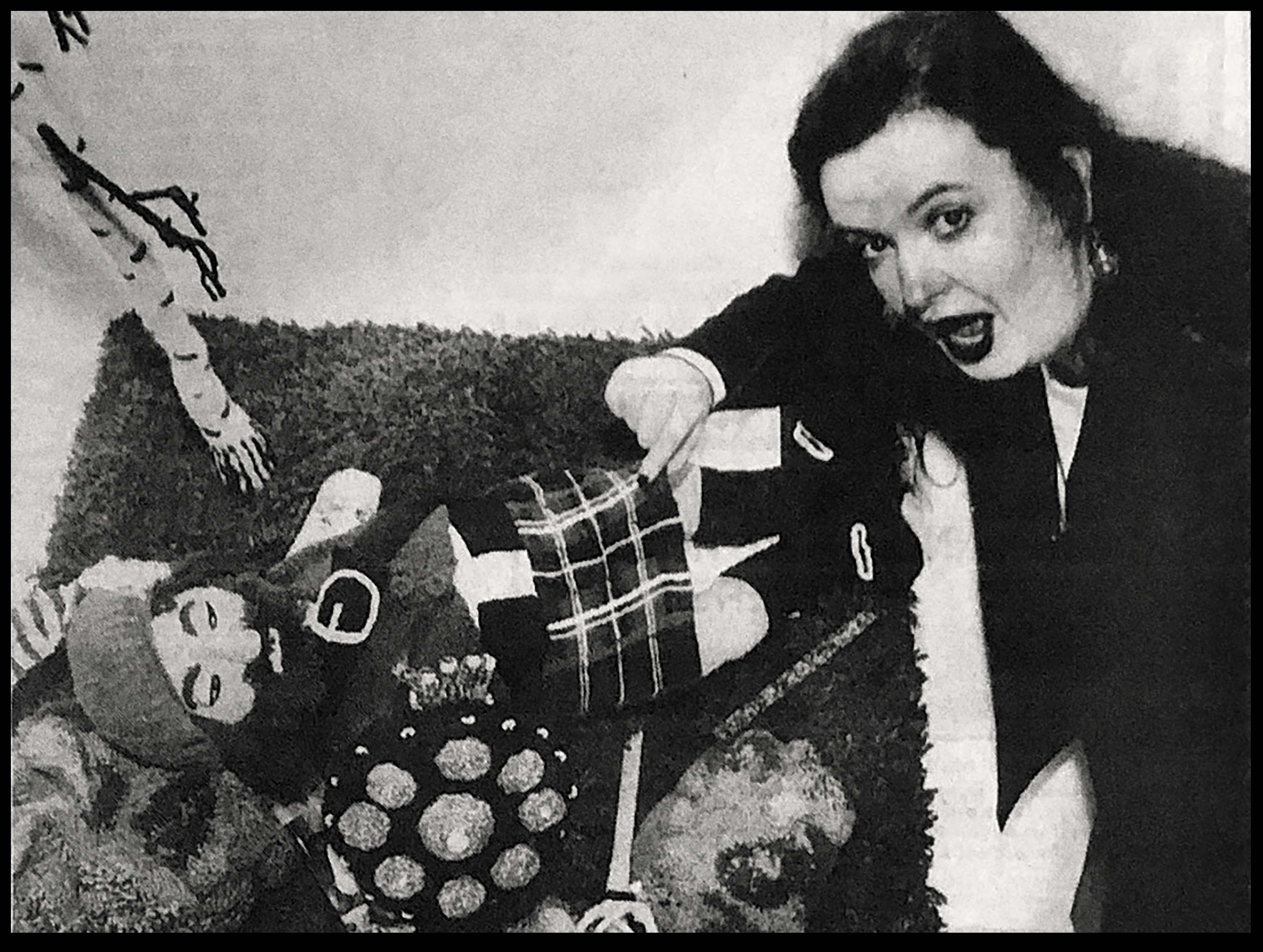 But it is the Knitted Imp that I remember her most for – it was truly her greatest moment. Wherever the car travelled the knitted version captivated audiences, sometimes in unusual ways. Despite the remarkable detail – a complete knitted engine tucked in the back, travel rug, AA map in the glove box, detailed interior, jack and repair kit, women in the Western Isles commented on the perfect tension on the flat roof panel (more on the Western Isles tour in the next episode).

To help create it, I had to drive to Nancy’s house in Tain in the Hillman Imp. Here I met Ernest her husband. He went to work carefully measuring the Imp, which I remember went on for some time. He was all round the exterior and then the inside with his tape measure and camera, recording every aspect of the car. From this data, and after much discussion and planning, Ernest would carefully build a wooden sub frame for Nancy’s knitting. Both on their second marriage, they were a remarkable team, with great energy for their age.

Ernest was a lovely patient man. He was a keen cyclist, enthusiastically embracing new approaches to the sport. He had a recumbent bike, and gave me a shot on his carbon fibre Trek racer, at a time when these things were seen as space age. Ernest had one of those endearing accents, foreign (from Latvia) but fused with Scottish influence. It was a bit later on, when he visited the Arts team office in Dingwall that the extent of his remarkable story surfaced. He had come in to see Brian McCabe, who was then Writer in Residence. Ernest had written his life story, not with the intention of publishing, but just for Brian check it over and give advice. I remember Brian being astounded at what he read.

Ernest was born in Riga, the Latvian capital, in 1928, his birth name being Elias Jakubovics. His father was from Imperial Russia and his mother was German, she converted to Judaism when marrying his Jewish father. The marriage broke up when Elias was young, and after his father re-married, he lived with him and his step mother, at times visiting his own mother in Riga. When WW2 broke out and the Germans invaded, his father turned down an offer to leave for St Petersburg, believing that it was better to avoid the Bolsheviks. Unfortunately he was taken by the Nazis, and Elias never saw him again. Elias was left in temporary accommodation with his stepmother, waiting to be moved to the Riga Ghetto, but still able to visit his own mother. On one occasion at his mother’s house, she was visited by a Gestapo officer, who was bringing papers arranged by her mother’s friends in Germany. These papers were confirmation of his mother as a German citizen, crucial for her survival. They were delivered by the infamous Klaus Barbie, who looked quizzically at the young jewish boy, but took no action.

In a twist of fate, Elias had been left with no papers, and aged 16, took the amazing decision that the best way to avoid detection was to sign up for the Latvian SS. Remarkably, he was accepted with no fuss and served the rest of the war in this division, most of the time retreating through Latvia and into Germany as the Soviets advanced from the east. At the end of hostilities he was held in a British-run prisoner of war camp in Belgium. The images below show Elias in his SS uniform, alongside the German papers for Ernest’s mother.

Elias, now Ernest, was eventually sent to work in England as a tunnel engineer, then gained employment with Balfour Beatty on the Hydro scheme in the Highlands, where he met his first wife. In a bizarre coincidence with our project, he worked for a spell in Coventry, the home of The Rootes Group, and where the Hillman Imp was designed. After returning to the Highlands, and the death of his first wife, Ernest settled in Tain, marrying Nancy, eventually helping her make the knitted Imp.

His story of a Jew joining the SS to avoid detection has to be one of the most remarkable accounts of the period. No wonder Brian was so astonished.

Nancy never put any of her knitted work for sale, keeping it all for her grandaughter. She died in 2016, with Ernest passing away the following year. He never spoke to me of his history, but in 1998, a couple of years after working with us on ImpPotent he gave this interview which is still on You Tube.

It is a long watch, but utterly compelling – as were both Nancy and Ernest.