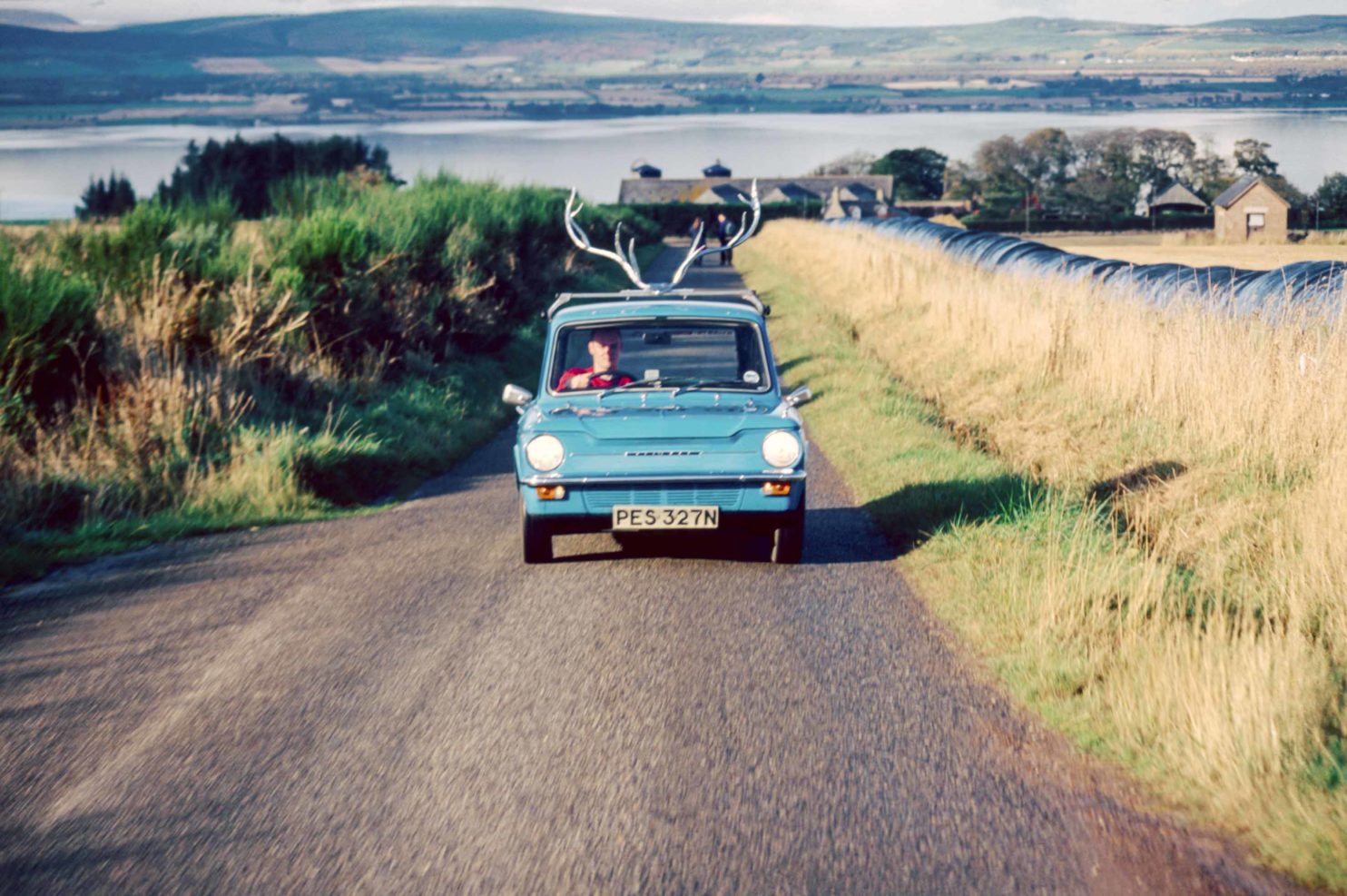 As Alison has already started delving into our project archive, I thought I could take us back even further – to 1996, when we were known as Highland Printmakers Workshop & Gallery. I always felt that last bit was a clumsy add on, and ironically one of the most memorable works produced during this period didn’t require a gallery. Impotent. 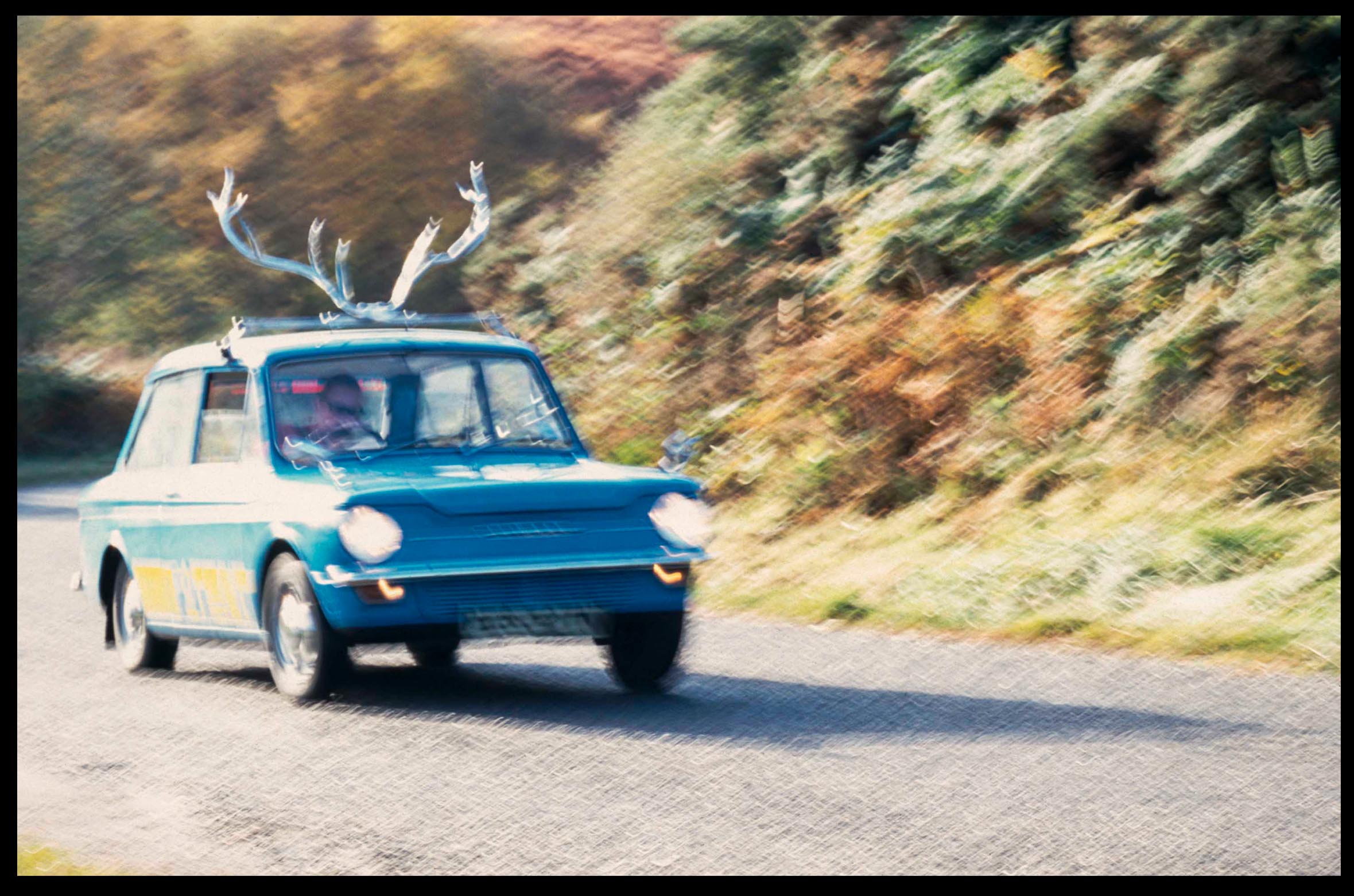 It all started with discussions around an idea to have artists respond to Scottish consumer icons. A list of suggestions was gathered including things like Lee’s Macaroon bars, Tunnock’s Teacakes, Stornoway Black Pudding etc, but it was one which didn’t contain fat that caught the eye. The more we found out about the Hillman Imp, the more it seemed to represent so much about Scotland. Remember this was the dark pre-devolution era, but I think a lot of it still applies today.

For those who don’t know, the Hillman Imp was a car produced by the Rootes Group (their rival to the mini and other small cars), which had received government incentives in return for being built in a deprived area. Clydeside, struggling under the loss of heavy engineering and shipbuilding, was needing to move on, and a huge car plant at Linwood near Paisley was the great hope. A similar idea was used in Italy when Alfa Romeo were given Italian Government money to build the Alfasud in Naples, instead of their hometown of Milan. This is not the only coincidence, both the Imp and the Alfasud (which translates as Alfa South) were brilliant products crippled by issues and problems. The Sud was constructed from Russian steel (at a time when there was a large communist movement in Italy) and rusted when someone sneezed near it. The Imp was rushed into production before ready and became unable to recover from resultant problems. Also, the factory was ill thought through and badly run – with the workers gaining a somewhat unfair reputation for being difficult. The whole Imp project had so much potential, so much brilliance, but came unstuck through silly mistakes. Do you see the Scotland bit?

So our idea evolved to concentrate our project on the Imp. Why not buy a car, and have artists create special features in the way that manufacturers do, sometimes crassly when a vehicle is coming to the end of its life. We would create a special edition Imp, the Potent. All the artwork would be contained on and in the vehicle, and it could tour anywhere an Imp could go. These images show the catalogue – in the style of a car brochure, complete with leggy blonde model, the late Gordon Sutherland. 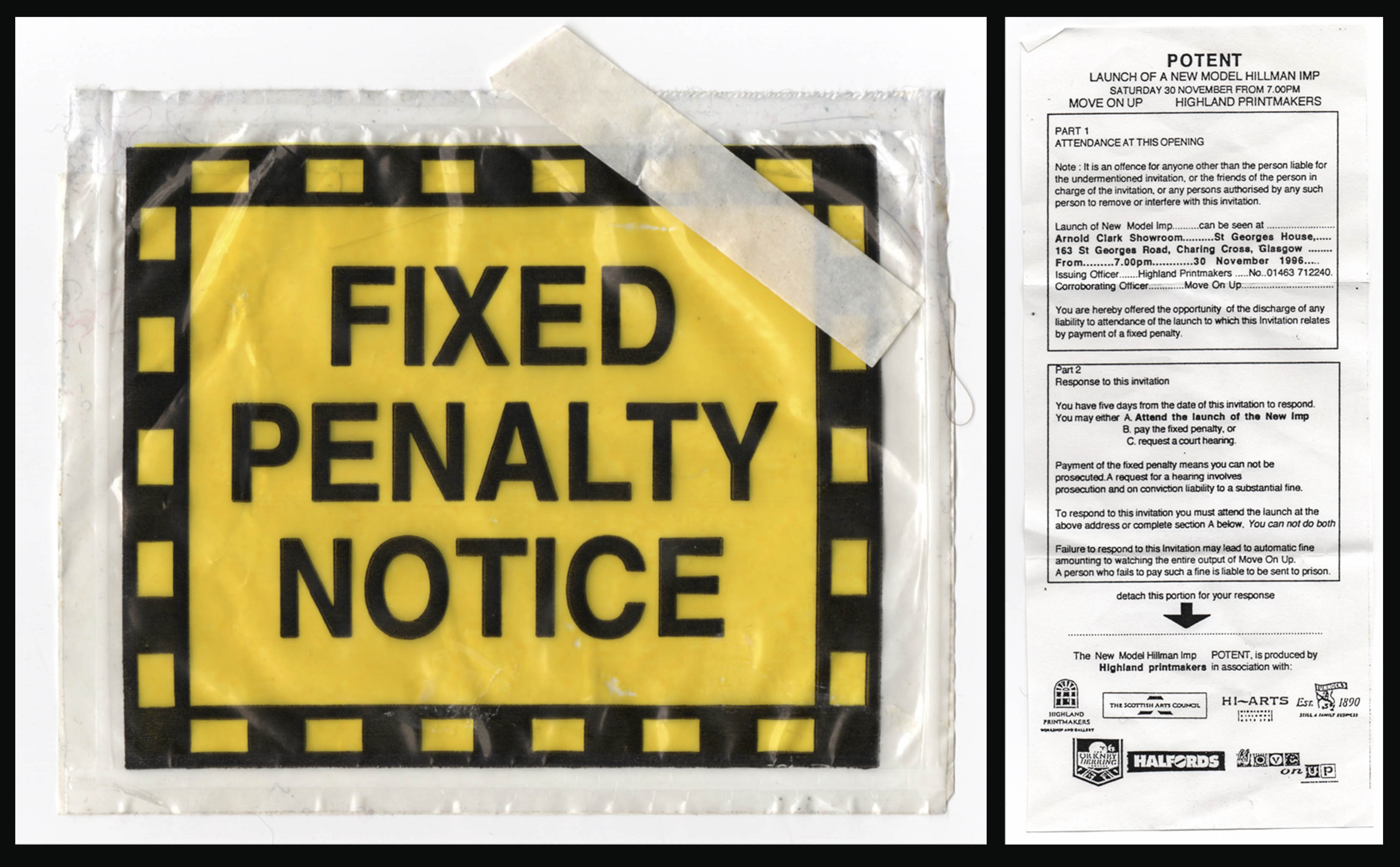 Our car really caught the imagination. After being launched in a car showroom in Glasgow ( invite, above, in the form of a parking ticket), it became the darling of the press, featuring in all the national papers, auto magazines, appearing on radio and the highlight being its own tv program – a half hour Ex-s BBC Scotland Arts show. This was made by Move On Up, Cromarty based production company, directed by Don Coutts and edited by Lindy Cameron. The tv program became an integrated part of the project, following the making of the car, and then being shown from the car itself. The Imp claimed to have the first hatchback – really a rear window that opened, and when the car and artwork was shown, the program ‘Linwood No More’ would be viewed from a portable tv inside the open rear window.

The involvement with Move On Up opened so many opportunities for the project, one of them was a memorable trip south to London and Coventry and I have just rediscovered these slides taken from that trip. Don wanted the car to be present in very shot, which meant it had to be driven to wherever they were filming. During this trip, it was waiting on its re chromed front bumper to arrive, so it wasn’t quite finished.

I needed a co driver for such a long trip, so enlisted a friend from school on Skye, Gordon (Piddle) Jeffrey, who had the pleasure of sticking to the artist made PVC seat covers all the way down the A9, M6 and M1. This is the car motoring on the M6, heading south. One of the most striking features was a set of chromed metal antlers, perched on the roof, made by sculptor Diane Maclean. Despite giving endless joy to other motorists, the polis at Beattock weren’t so happy. Even bribing them with Tunnocks Tea Cakes didn’t soften their heathen attitude. Tunnocks were one of many sponsors – they agreed to keep the Lois Walpole woven picnic basket topped up with tea cakes throughout the exhibition tour. We were made to remove the antlers; Gordon wasn’t happy. I remember they were very uncomfortable inside the small car, jabbing the backs of our necks, so as soon as we were south of the border, we clamped then back on the roof. 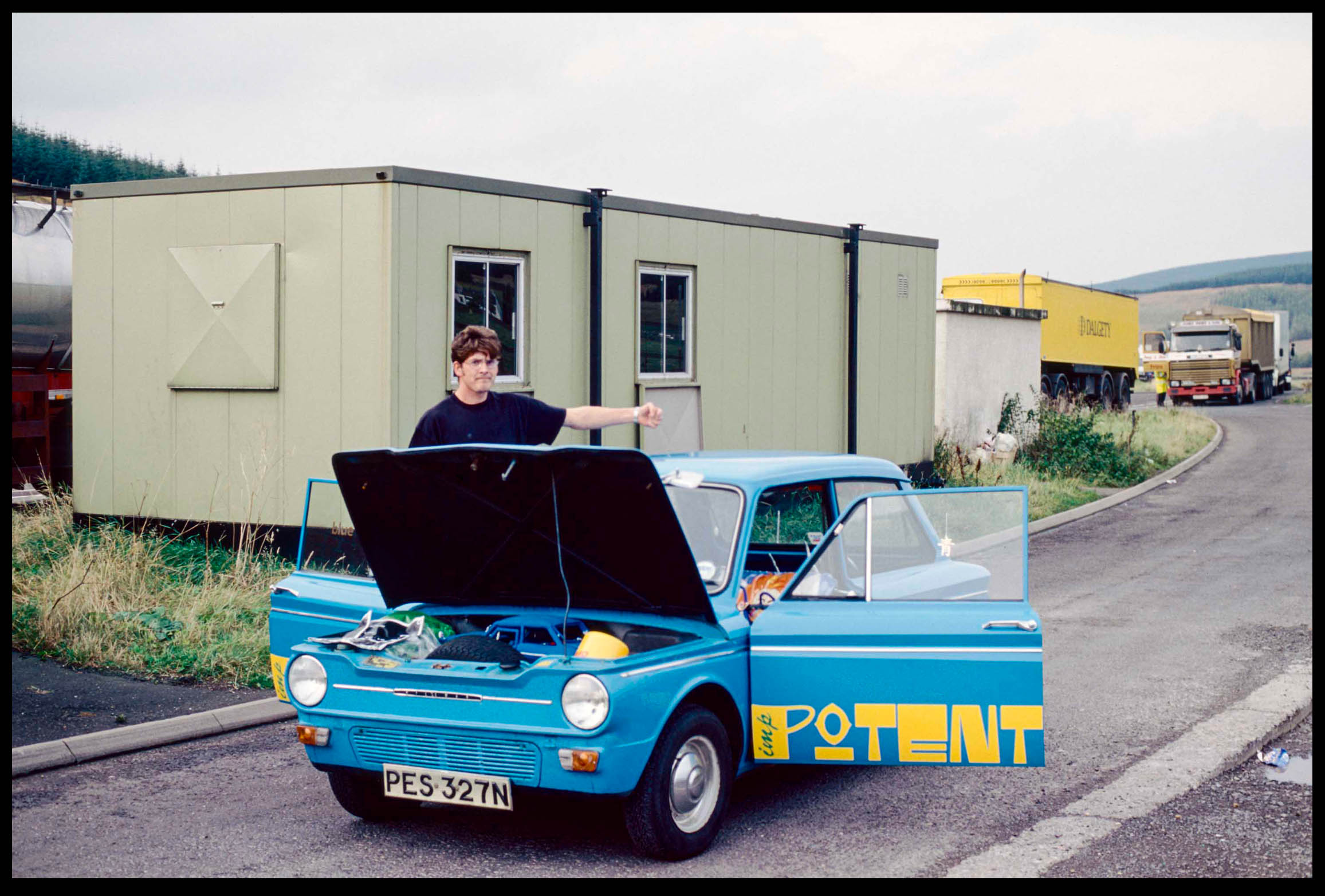 The purpose of driving all the way to London was to meet and interview Jarvis Cocker of the band Pulp. He was an Imp driver, but one that let us down. After much suffering in getting the Imp to London, he didn’t turn up. He missed a golden opportunity to further his career. We were left to do some bits of filming around London with Don and the crew, and spent some time outside a Portuguese cafe, where a large crowd gathered to see the car. One of the things that impressed most, was Nancy Jacob’s remarkable knitted Imp – I’ll talk more about this in the next part of the story. 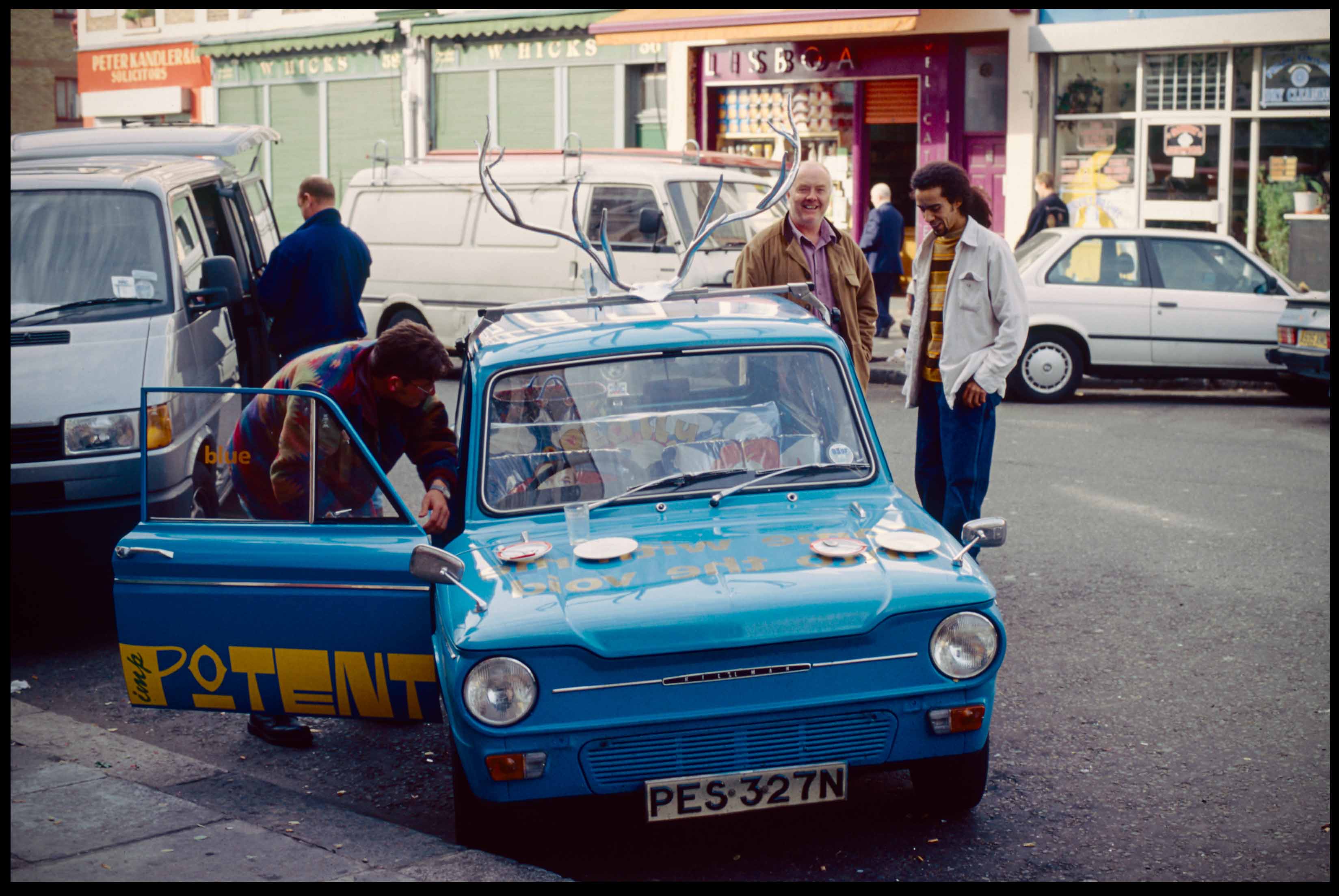 After leaving London, we headed to Coventry, the city that had been the home of the Rootes group, and where the Imp was designed. Rootes had taken a real gamble in handing the design of their new baby to two very young designers, Mike Parkes and Tim Fry. They saw potential in a fire pump engine – the Coventry Climax, and had it adapted for the Imp. It was ironic that our ImpPotent would be powered by a Climax. This was a rev happy 875cc 4 cylinder aluminium engine giving 39 – 51bhp. The Imp felt very racy with a short throw gear change, and handled superbly, despite the engine hanging out the rear. This is not surprising as Mike Parkes went on to be a successful racing driver, even driving for Ferrari in F1. Unfortunately he died in a 1977 road accident near Turin. Tim Fry (below) eventually set up his own design company, Small Fry, and we were able to meet and interview him in Coventry. He was rightly proud of his work on the Imp, but a little sad with the way it had suffered from needless issues, which would all have been ironed out with more time. 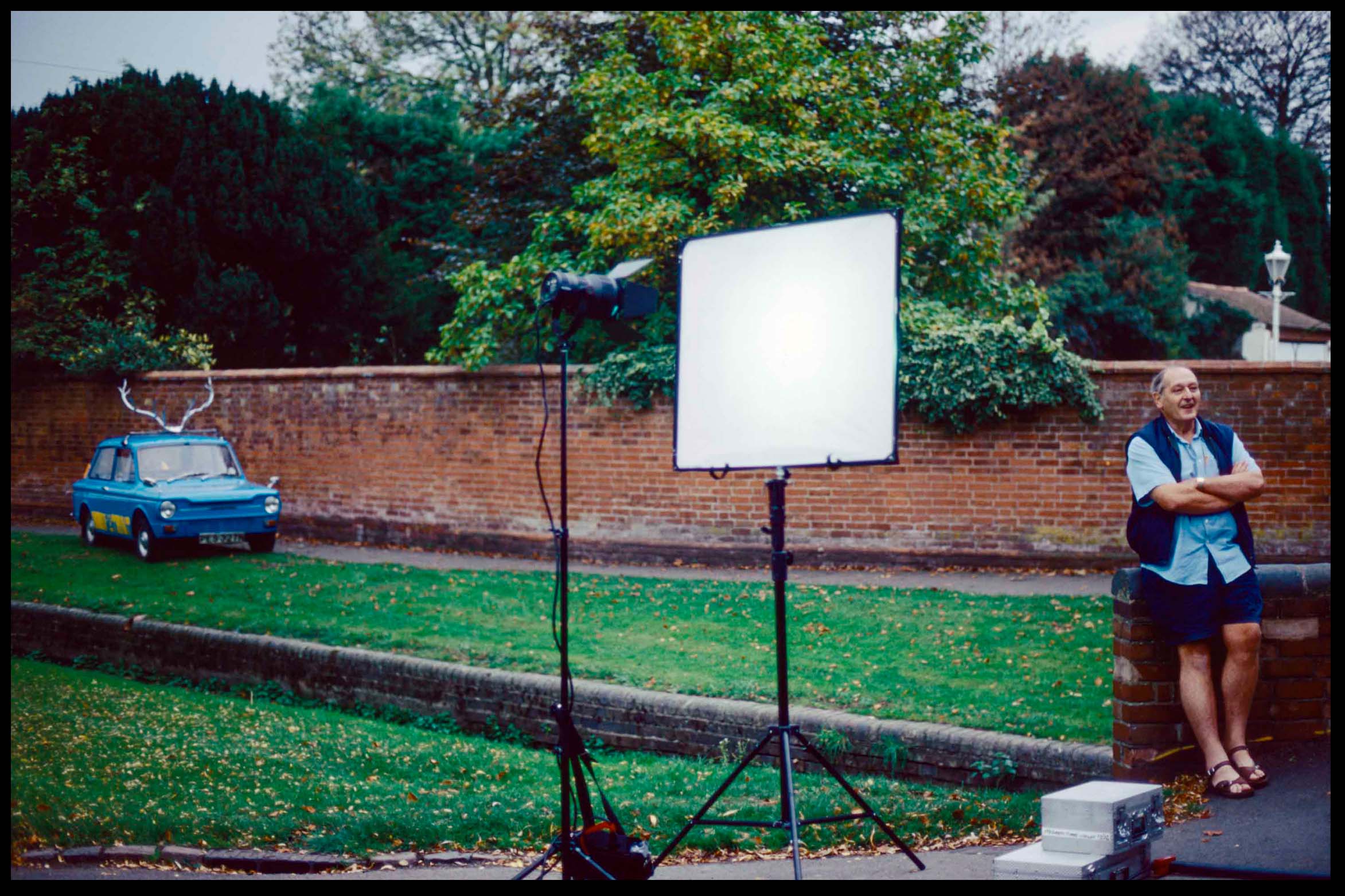 It was a pleasure to meet him, and now sad to hear that he too passed away in 2004. His company Small Fry still continues with numerous awards to its name.

Also interesting to hear him offer sympathy to the workforce at Linwood, reflecting the anger and frustration we encountered when meeting some of the factory employees. Their Linwood experience had been a major part of their lives, and one of the most eloquent was Robert Crawford, who went on to become a distinguished poet, reflecting his time at Linwood with ‘Jesus Christ Endorses The New Hillman Imp’.

Linwood closed in 1981, and arguably the most dramatic moment in the “Linwood No More’ program was a bit of footage from Reporting Scotland, showing a biblical scene when the last car, a Hillman Avenger, came off the line, followed by a coffin passed along above a mass crowd of workers.

All in all, ImpPotent was an amazing experience, the exhibition toured for over two years. I’ll show more from that tour in further posts. If you can stomach it.