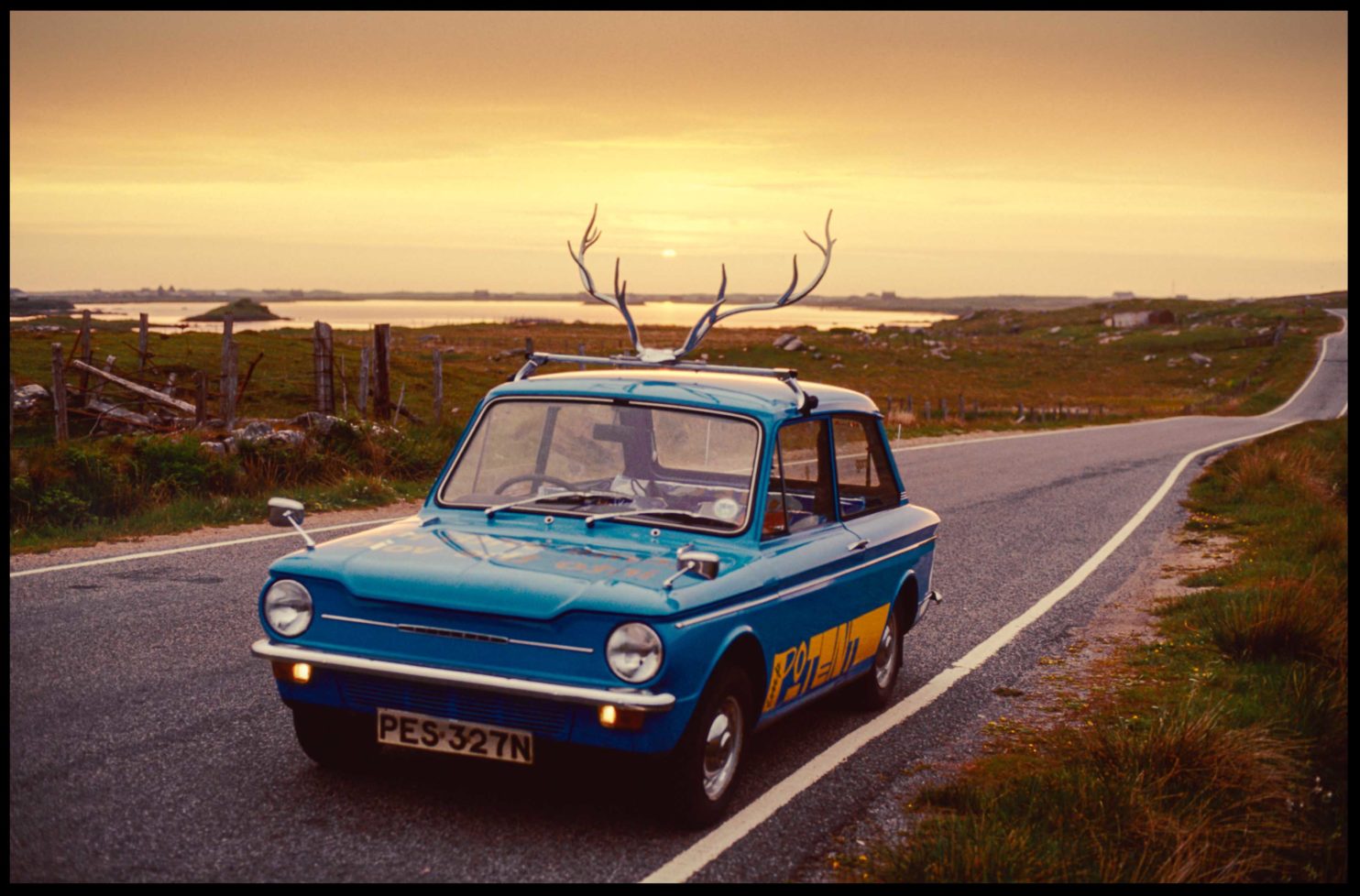 It’s been a long delay, but at last I have found the time to conclude the ImpPotent trilogy of blogposts. What better time than another lockdown…

If you remember from the first two episodes, ImpPotent was a 1996 project from Highland Printmakers Workshop (now Studio), which celebrated the Hillman Imp, the iconic and notorious Scottish built car. Artists were commissioned to create work which would be fitted to or contained within a Hillman Imp, in the style of a special edition which car manufacturers are so fond of. Called the Potent, it had its own brochure/catalogue and was launched in a Glasgow car show room. The whole project was the subject of an ExS BBC Scotland documentary, produced by Move On Up.

After its Glasgow debut, the exhibition toured for two years. It didn’t need a gallery, just anywhere a car could get to, and it could be booked for an hour, days or weeks. When displayed, the car opened up like a jewellery box, showing the artwork and viewings of its own tv programme. The Imp claimed to be one of the first hatch backs, but really it was just the rear window that opened, above the engine bay, and it was on the parcel shelf that the portable tv sat, with the audience seated behind the car. Remember, this was from 1996 to 1998, so no flat screens or iPads.

It was my job to drive and present the car and over the two years, the Imp covered nearly 18,000 miles, so a busy time. It travelled to venues all over Highland, went to Glasgow, Aberdeen and Dundee. Most of the time it sat outside, but where permitted it was taken into buildings, even going up steps in Dundee. One of the most memorable bookings was from Comhairle Nan Eilean Siar, a two week tour of the Western Isles, from Lewis down to Barra. The car was to visit schools, colleges, village halls and community centres as it travelled south.

Coming off the ferry in Stornaway, first stop was at the Nicholson Institute, visiting the Art Department with Ian Brady, art teacher – not the moors murderer looking to take advantage of Lewis’s vast blanket bog. From there it was up to Lional School, at the spectacular Butt of Lewis, before beginning a zigzag journey south. It was June and the weather started off warm and got progressively hotter.

Achmore, Lewis and the beaches of Harris

After coming through Lewis and then Harris, meeting the art teacher and singer Mary Smith that years later we would work with on Sexy Peat, it was on to Berneray, where it reached 28C. Not ideal with shiny vinyl seat covers – I was having to peel myself out of the Imp for every stop.

The short ferry crossing – now a causeway – took the Imp on to the Uists, and my base in Benbecula, the middle island. Benbecula is connected to North and South Uist by fords, so it was ideal for travelling to various venues on the islands. On North Uist the Imp visited Taigh Chearsabhagh Museum & Arts Centre, not long opened, and one of my favourite arts venues in Scotland. In Benbecula, one of the stops was Balavanich Primary School, where I had been a pupil in the 70’s. The travelling art teacher on the islands at that time was Andrew McMorrine, now a studio user at HPS, but it was head teacher Mr MacGillivary who welcomed me and immediately asked me to help him remove a sparrow hawk from the school hall. A tricky business altogether.

Driving to South Uist took the Imp into Catholic country, where the singer Michael Marra once observed that all of the football teams use the Celtic home strip, so the away teams have to wear balaclavas. In the blinding sunshine, ImpPotent looked very photogenic parked at the roadside shrines. Travelling down the island, I passed the hospital at Daliburgh, where aged 5 years I had a verruca removed under general anaesthetic. Really.

In the 90’s Eriskay – just below South Uist- did not yet have a causeway, so while on board the small ferry, I had to go up to the bridge to explain the Imp to the skipper and crew. It was on Eriskay that the weather finally broke, giving a day of torrential rain. After a lunch of garlic cockles on toast in the Politician bar, I had to head to the “square”, really a patch of grass in front of the shop. The idea was that people could come and look at the car and exhibition, but with the weather as it was, there were no takers. Until the door opened and in climbed my contact for Eriskay, the famous Father Calum. He told me that no one would come, so just to head up to the manse for a sandwich. Sat around a piece pyramid, he told me my father had fixed his telly (my Dad always had about 10 TVs under our stair for repair – people clearly missing the one black and white channel), and poured me a dram. My memory might be exaggerating it, but I think it was a full mug, and I protested saying I had to drive an attention grabbing car back to Benbecula. He reassured me by saying that if the polis stopped me, tell them Father Calum gave you the dram…

Barra: airport and looking down on Castlebay.

It was a remarkable trip, the Imp becoming quite the celebrity as it crisscrossed the islands.

The last Polaroid is from another booking – the final trip for ImpPotent. It was from Paisley Museums, and the photo shows the car with museum staff parked outside an Asda supermarket, built in the Linwood site where the Hillman factory had once stood. The Imp was returning to its birth place. The museums estimated that around 15,000 people came to see the exhibition in the two weeks it was there. A fair amount of them seemed to have worked at Linwood. I remember one man, eyes welling up, asking me to raise the back seat, so he could show me a panel he had welded in place. Standing beside him, staring at the floor of the car, brought home what an emotive subject it was, and how the Imp really reflected all the people involved in its remarkable story.